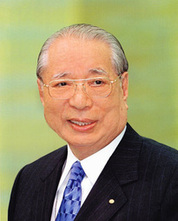 Daisaku Ikeda (池田 大作, Ikeda Daisaku, born January 2, 1928, Japan)  was born on January 2nd, 1928, to a poor family that were seaweed farmers. Little could anyone have ever imagined that he would be a mentor, leader, peace activist, and truly one of the greatest humans that has ever lived. As a child, he was sick, and was later diagnosed with tuberculosis, and doctors predicted he wouldn't live past the age of 30.

Daisaku Ikeda was determined not to let his mentor, Josei Toda, down. In 1975, Mr Ikeda became the first president of the Soka Gakkai International (SGI), now a global network linking over 12 million members in some 192 countries and territories. President Ikeda has promoted dialogue between people of different countries, cultures and belief-systems, as a fundamental step towards building world peace. As leader of the lay Buddhist movement, he has continued to meet with leading activists and thinkers from around the world. The resulting dialogues and publications, which encompass politics, culture, philosophy and science, explore life and the universe and seek solutions to the problems that confront our rapidly changing world. Ikeda has also founded peace-research, educational and cultural institutions with a view to promoting greater mutual understanding between nations. He has talked with more leaders than most ambassadors have during their career. A truly powerful and inspirational man that has taken responsibility of accomplishing kosen-rufu and inspiring people to do Human Revolution.

As of November 2014, he has received more than 350 honorary doctorates, and over 740 honorary citizenship from cities, states and local governments around the world. This is the foremost in the world! He shares these honors with his members as proof of the accomplishments of not just himself, but the Soka Gakkai International as a whole.