i. Awakening to the Profound mission of Bodhisattvas of the Earth 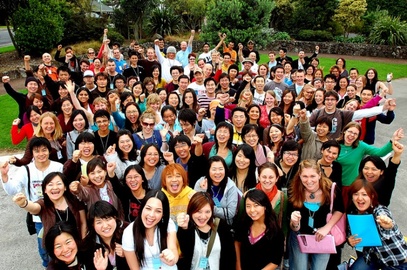 Does that mean by chanting Nam-myoho-renge-kyo to the Gohonzon will naturally qualify oneself as Bodhisattvas of the earth?

When SGI members chant daimoku assiduously to the Gohonzon, they are immediately elevated to the world of Buddhahood. It is likened to joining the ‘Ceremony in the Air’, just like what President Ikeda states, “Through our daily practice of reciting the sutra and chanting Nam-myoho-renge-kyo, we can join the eternal Ceremony in the Air here and now. We can cause the treasure tower to shine within us and to shine within our daily activities and lives. That is the wonder of the Gohonzon. A magnificent cosmos of life opens to us, and reality becomes a world of value creation.” [The World Of Nichiren Daishonin’s Writings, The Gohonzon – The Object of Devotion Part 3]

During his incarceration, President Toda witnessed himself participating in the ‘Ceremony in the Air’ as one of the Bodhisattvas of the Earth. He described that he was chanting to the Dai-Gohonzon, glittering in golden colour. It was at that instant he attained his enlightenment in the prison cell. He was awakened to his noble mission of the Bodhisattvas of the Earth.

President Ikeda states that the awareness of being the Bodhisattvas of the Earth is the starting point of the Soka movement. It has to transmute into commitment that leads to actions.

President Toda did not stop at his awakening that his life is indeed the embodiment of Bodhisattvas of the Earth. Indeed right after descending from the ‘Ceremony in the Air’, President Toda vowed to spread the Lotus Sutra till his last moment of life. Cherishing a great wish for the widespread propagation of the Mystic Law, he plunged into a lone battle to rebuild Soka Gakkai amid the ruined and devastated postwar Japan.

President Toda began his efforts by awakening one after another, the Bodhisattvas of the Earth that emerged from the earth just as described in the Lotus Sutra. He built a stronghold of 750,000 families practising the Daishonin’s Buddhism before passing the baton to his trusted youth division members.

Before he passed away, Mr. Toda said: “Daisaku, you’ve done a great job. The Gakkai is safe now. Let’s make our way again together throughout eternity”; and “I am fortunate to have such a fine disciple. I was happy to have been able to accompany Mr. Makiguchi to prison, but it makes me even happier that the future has opened up for the Soka Gakkai thanks to you.”
[The Noble Vow of Bodhisattvas of the Earth Is the Heart of Soka, May 2010]

These efforts were never facile. Like his mentor, President Ikeda sought out one capable person after another who would fight alongside him. He then fostered them, encouraged them and worked together with them to build a magnificent people’s movement. These actions truly signify the principle of ‘emerging from the earth’.

President Ikeda was able to uphold these arduous tasks because he took his mentor’s spirit and vow as his own. He rose to the most daunting of challenges, with the powerful dynamism of a charging lion. These were all made possible due to the spirit of ‘never for a moment forgetting his mentor.’

It is without doubt that, at all times, President Ikeda’s heart was together with his mentor, President Toda. His unsparing effort to realize his mentor’s vision is a great testimony to the shared struggle of mentor and disciple. President Ikeda often shares that he continues to hold an inner dialogue with his mentor on a daily basis as he forges on with life’s challenges.

I would always ask myself what Mr. Toda would say in a given situation, how he would deal with this or that issue. No matter how fiercely the three obstacles and four devils attacked, when I thought of my mentor, the sun of victory rose in my heart, brightly illuminating the way forward. My mentor’s care and compassion for me was immeasurable.
[The Noble Vow of Bodhisattvas of the Earth Is the Heart of Soka, May 2010]

These earnest exertions exemplified by the 3 founding presidents of SGI represent the practice of the Bodhisattvas of the Earth. Their actions resonate with the spirit of “If you are of the same mind as Nichiren, you must be a Bodhisattva of the Earth”. They have striven selflessly for kosen-rufu in the same mind as the Daishonin, to realize his will and decree. The Buddha’s will and decree is none other than the noble vow to elevate all people to the highest state of life.

Hence, the practice carried out by the Bodhisattvas of the Earth transcends the basic practice of chanting Nam-Myoho-Renge-Kyo to the Gohonzon merely for his or her own happiness. Further to praying for the happiness of others, the 3 founding presidents demonstrated with their lives on how they could reach out to the people who are suffering and awaken in them the limitless potential of the Bodhisattvas of the Earth.

The practice of Bodhisattvas of the Earth encompasses the principle of practicing for oneself and others too. Truly, it is by taking action and engaging in day-to-day dialogue to encourage the suffering people and bringing smiles to their faces that one brings out the qualities of the Bodhisattva of the Earth.

When one person stands up based on the shared vow of mentor and disciple, two, three, and eventually a hundred like-minded people will follow. This is the eternal formula of kosen-rufu.
[The Noble Vow of Bodhisattvas of the Earth Is the Heart of Soka, May 2010]

SGI is the organization that practises the shared vow of mentor and disciple. Precisely the direct disciples who embrace this solemn and sublime spirit of their mentor President Ikeda, they manifest in themselves the qualities of the Bodhisattvas of the Earth. They promote the philosophy of real benefit that gives hope and inspiration to those in the depths of suffering and despair and guides them to happiness.

President Ikeda states that those who have awakened to their mission as Bodhisattvas of the Earth fear nothing. When the SGI members undertake the mission to help others become happy, courage and strength well up spontaneously from within them too.