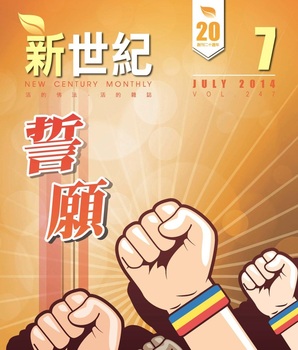 The SGI is a wondrous organization that has appeared in accord with the Buddha’s will and decree. Precisely without the great vow set forth by the founding presidents of Soka Gakkai, Nichiren Buddhism will still be confined within the conservative Nikken’s sect in Japan.

It is the selfless dedication of the eternal mentors of SGI particularly President Ikeda to propagate the law that expands the Buddha forces across the globe. This function creates vehement waves, making up of like-minded people that sweep through the world. This movement will in time, actualise the peace of the land and thereby fulfilling the great vow of Nichiren Daishonin.

Only when we pray with the great wish to realize kosen-rufu are we truly living in accord with the spirit in which the Daishonin inscribed the Dai-Gohonzon for the sake of all humanity. When we do so, the immense life-state of the Buddha responds. That is why the faith upheld by the members of the Soka Gakkai yields boundless and infinite benefit.
(The World of Nichiren Daishonin’s Writing, The Gosho is the Buddhist Scripture for the Latter Day of the Law)

The ultimate form of prayer is a vow. This great vow that SGI members pray everyday is none other than the noble pledge to dedicate their lives to the great desire for the widespread propagation. Buddhism comes down to practice and its real purpose is to bring peace and security to the people. Yet by setting a prayer without concrete action tantamount to naught. After all, it is by making this noble vow and taking action to accomplish it that fuses one’s life with the immense life-state of the Buddha.

This writing serves the purpose of opening people’s eyes to the great vow of the Daishonin. It also displays his fighting spirit to carry through the great vow, even in the face of the 3 powerful enemies and at the cost of his life. Nichiren Daishonin had made at least two great vows in his life. The first vow was made at the age of twelve when he pledged to become the wisest person in Japan. The second was at the age of thirty-two, just before he established his teaching.

The Daishonin made the first vow when he entered Seicho-ji temple in Awa province. At the tender age of twelve, the Daishonin’s life  overflowed with the desire to seek the teachings of Buddhism and embark on the life of a priest. His first vow was to become the wisest person in Japan. It arose from his desire to repay his gratitude to his parents and their friends who had worked hard alongside them.

Having made this great vow, the young Daishonin prayed and studied in earnest. In his writings, he describes how, following his ordination at age sixteen, he prayed before the statue of Bodhisattva Space Treasury, the object of worship at Seicho-ji temple, and how this bodhisattva appeared and bestowed upon him “a jewel of wisdom as bright as the morning star”(The Tripitaka Master Shan-Wu-Wei, WND 175-76). With this wisdom, the Daishonin states, he mastered the principal teachings of the “eight schools and ten schools” of the day.
(The World of Nichiren Daishonin’s Writings, The Daishonin’s Lifelong Dedication to His Vow)

Nichiren Daishonin attained the wisdom of the Mystic Law at age sixteen. This wisdom enabled him to realise the intrinsic nature that existed within his own life and revealed the Buddha nature as an ordinary person. As a matter of course, this arose from his deep and earnest prayer to lead people to enlightenment. However, the crux lies in that his journey did not end with his enlightenment but rather as his starting point to further seek the way.

His receiving of a “jewel of wisdom” was in fact the transformation of his vow into enlightenment. Enlightenment always begins with a vow, President Ikeda explained. Therefore, as he pursued the Buddhist study in search for a teaching that would enable people to realize genuine happiness in the Latter Day after his enlightenment, he concluded that Lotus Sutra was the answer to his exploration. Moreover, the wisdom that he attained was the Mystic Law of the Lotus Sutra.

Since the Daishonin concluded that Lotus Sutra was the only teaching that could liberate the people of the evil Latter day from the suffering of life and death, he made a vow for the realisation of kosen-rufu. It means that after his research, his vow deepened into the desire to spread the Mystic Law of the Lotus Sutra to bring happiness to all people and proclaim the establishment of his teaching. After all, it was a great vow stemming from his enlightenment.

After establishing his teaching, the Daishonin encountered and overcame tremendous persecution as a votary of the Lotus Sutra who stood up with the determination to realize kosen-rufu. Through his selfless dedication to spreading the Law in the face of all obstacles, he cast off his provisional self and revealed his true identity as a common mortal bringing forth the state of Buddhahood that has existed from time without beginning.
(The World of Nichiren Daishonin’s Writings, The Daishonin’s Lifelong Dedication to His Vow)

After discarding the transient status and revealing his true identity as the Buddha of the Latter Day, Nichiren Daishonin is said to have deepened his enlightenment. Consecutively, he placed his entire life focusing on the establishment of the entity of the Law, the Gohonzon for the people of the Latter Day. He aspired to transmit his own vow and enlightenment to people of the whole world through the fundamental object of devotion known as the Gohonzon. The Daishonin taught the life of the Buddha as a reality and thereby manifested the Gohonzon as a ‘clear mirror’ to enable all people to bring forth their own Buddhahood.

To put the Daishonin’s life in chronological order, he first made his vow at age twelve when he entered Seicho-ji temple. His vow was transformed into enlightenment at age sixteen. After studying the sutras, he established his teaching and deepened his vow to realise kosen-rufu. As his vow deepened, he confronted all great persecutions as the votary of the Lotus Sutra and finally deepened his enlightenment in the Tatsunokuchi persecution. The entire sequence of the Daishonin’s life can be viewed as vow, enlightenment, deeper vow, deeper enlightenment.

The Daishonin’s life was beset by numerous and even incredible persecutions in the struggle to protect the Law. Yet none of the persecutions impeded him from advancing the great desire for the widespread propagation. Many will therefore arrive at the assumption that simply because Nichiren Daishonin is a Buddha, he naturally has the ability to withstand it. Nonetheless, he attributed his strong and unconquerable self to the great vow that he had made that brought forth the diamond-like state of the Buddha.

The Daishonin states: “All other troubles are no more to me than dust before the wind.” True peace and security exist in a strong self. It is when we forge such a self by making a great vow that the path to genuine peace and security in this life opens up before us.
(The World of Nichiren Daishonin’s Writing, The Gosho is the Buddhist Scripture for the Latter Day of the Law)

It is by making a great vow that one creates a strong self and the determination to win in the struggle against the devilish function from the start. In spite of that, it is never an easy task to battle the devilish function unless one solidifies his vow even further to exactly what the Daishonin teaches, “I vowed to summon up a powerful and unconquerable desire for the salvation of all beings and never to falter in my efforts” (WND, 240).

The strength of the vow empowered the Daishonin to well forth the state of Buddhahood to completely vanquish the devilish forces at work in his own heart. It was this inner strength that allowed him to forge such a strong self to withstand any and all incredible persecutions that appeared to obstruct his advancement for kosen-rufu. By revealing his own great vow, the Daishonin was showing his disciples the road to victory.

It is natural that when SGI members start practising Nichiren’s Buddhism, they practise as mere believers. They tend to focus on accumulating benefits of their own and do not work for the well-being of others. Unless they carry out the bodhisattva practice and work for  others' happiness like the practitioner of the Lotus Sutra, they could not become Buddha.

Mr. Makiguchi called on people to lead lives of major good based on a bodhisattva practice, even if it meant facing obstacles and devilish forces. This is what it means to act in direct accord with the great vow for kosen-rufu that ran through the Daishonin’s life.
(The World of Nichiren Daishonin’s Writings, The Daishonin’s Lifelong Dedication to His Vow)

Similarly by making a great vow for kosen-rufu, it equips the SGI members with the strength to overcome their weaknesses.  It is this vow that strengthens their inner resolve and manifests as courage to battle any and all difficulties. As a result, the difficulty that  one person of strong self encounters, will appear to him or her as a  ‘molehill’. In contrast, when the same intensity of difficulty appears before another person of weak self, it may mean a ‘mountain’ to him or her.

The founding presidents, too, persisted in numerous persecutions in the course of their selfless dedication to propagate the Law. All obstacles that surfaced to obstruct their endeavours appeared to them, as “All other troubles are no more to me than dust before the wind.” They are the exemplariness to demonstrate what it takes to practise as true practitioner of the Lotus Sutra. It is all because they do not forsake their vow in which they set. A vow can only be called a vow when it is carried through to the very end.