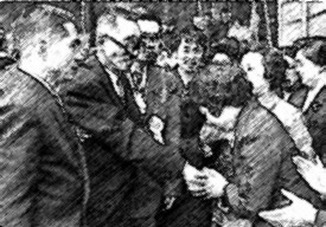 Since the important milestone of May 3rd 2010, President Ikeda has stopped attending all meetings. This well-timed moment by President Ikeda is one that is most crucial and decisive in the course of kosen-rufu. All previous guidance given by President Ikeda was to prepare for this very moment, the time where his direct disciples take the lead in the future development of the Soka Gakkai.

The youths of this generation are the ones whom President Ikeda places greatest concern and expectation on, as they are the ones who must pass down the correct spirit of the teachings of the 3 founding presidents and continue the path to carry out kosen-rufu into the eternal future. Being a youth at this point in time, we are the last generation of leaders who have the good fortune to learn directly from President Ikeda, the greatest teacher of humanity and the living example of a true practitioner of Nichiren’s Buddhism. We are also the immediate generation that must embody the correct spirit of the mentor so as to pass it down to future generations.

Quoting his mentor President Toda’s words in his message for HQ leaders meeting in June 2010, President Ikeda expresses his expectation on the youth of the essential phase:

“I’ve fostered you into capable people. Now I leave things up to you. The time has come for you to take responsibility, decide what to do, and see it through on your own.”
[Now Is Your Time to Take the Lead, June 2010]

President Ikeda has painstakingly created this time for the “dress rehearsal” of kosen-rufu to take place, watching over us and waiting for our victory reports. How do we, the Ikeda direct disciples in Singapore, respond to President Ikeda’s expectation? What have we done to reassure President Ikeda that the future of Singapore is in safe hands?

President Toda sternly warns, “No matter what happens, I will win without fail. The most important thing is kosen-rufu, the Daishonin’s mandate; it mustn’t be delayed for even a day!”
[Awakening to the Profound Mission of Bodhisattvas of the Earth, Nov 2006]

Though a mentor may have many disciples, it is a sad and lamentable situation if none of them actually embrace the same spirit as their mentor or are willing to share their mentor’s sufferings and joys. This is not the way of mentor and disciple of the Soka Gakkai.
[Awakening to the Profound Mission of Bodhisattvas of the Earth, Nov 2006]

It is at such times whereby genuine disciples can be clearly differentiated from the fake ones. Are we attempting to glorify ourselves and making ourselves look good by parroting what the mentor says; or are we making our mentor’s heart our own, actualising our mentor’s words and showing concrete results in expanding the buddha forces?

Being a genuine disciple has nothing to do with positions in the organisation! It is the heart that matters! Unless the disciple makes the mentor’s heart his own and strive with the same commitment as his mentor, he is not walking the true path of mentor and disciple. True disciples fight with the same powerful resolve and intense commitment as the mentor. They are prepared to face all persecutions that are bound to surface in the course of kosen-rufu.

President Ikeda repeatedly talked about the spirit of the lion king in all his 3 visits to Singapore.

No epic undertaking can be accomplished in a single generation. Only when the mentor’s spirit is inherited by the disciples, and passed on continuously to successive generation of disciples, can such undertaking be achieved. I, too, am confident that we have nothing to worry about and that the future of worldwide kosen-rufu will be secure as long as you, the members of SSA, are here walking the “lion’s path”.
[SSA-SGI Australia Executive Conference, Nov 2000 in Singapore]

This is President Ikeda’s expectation of his direct disciples in Singapore!

When one person stands up based on the shared vow of mentor and disciple, two, three and eventually a hundred like-minded people will follow. This is the eternal formula of kosen-rufu.
[The Noble Vow of Bodhisattvas of the Earth Is the Heart of Soka, May 2010]

Nothing brings more happiness to President Ikeda than to see his direct disciple winning victories after victories.

“We have a mission
to accomplish kosen-rufu without fail. . . .
I leave the future to you.
I’m counting on you to realize kosen-rufu!”
These words of my mentor
resonate unceasingly
in the depths of my life.
…
Committed to answering his call,
I will exert myself again today
in a spirit of oneness with my mentor!
The promises I made him
I will fulfill!
[Shine On Brilliantly, Our May 3!, May 3 2010]
<ii. Entering the Essential Phase