iii. The Vow of Our Founding Presidents 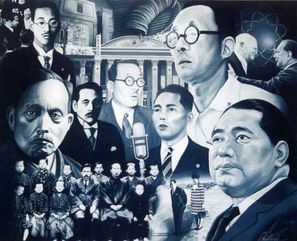 Daishonin made his vow when he was desolated, outnumbered by adverse and belligerent forces. He declared that victory is not decided by numbers but by one’s own heart or steadfastness. It includes a resolute commitment to the great vow for kosen-rufu, the courageous and intense determination to fight unwaveringly against evil and wrongdoing, and the spirit of compassion to lead others to enlightenment. Because of his strong faith in the Lotus Sutra and his indomitable, lion-like courage, the Daishonin was able to emerge triumphant over all obstacles.

Founding Soka Gakkai president Tsunesaburo Makiguchi (1871–1944) once said, “Do we make our lives dwellings of the Buddha which lead us to happiness or do we instead make them abodes of devilish functions which lead us to unhappiness? We have to choose either one or the other. Actively driving devilish functions out and defeating them will lead to happiness and kosen-rufu.”   In this statement, President Makiguchi called for a return to the original spirit of Daishonin’s teaching to attain happiness is one’s lifetime.  Through his own dauntless efforts to uphold the Daishonin’s Buddhism, he taught that the path of faith for attaining Buddhahood in this lifetime and that realizing the goal of kosen-rufu entails an unceasing struggle against devilish functions.

President Ikeda cites President Makiguchi double underlining on his personal copy of Nichiren's writings the passage “Here I will make a great vow,” and also wrote “great vow” in large characters in the margin next to it.  President Makiguchi lived out his life true to this great vow, never acceding to the oppression of Japan's militaristic authorities.

At a general meeting of the Soka Kyoiku Gakkai in May 1942, President Makiguchi declared, “We must guide the country in the direction of great good. This is like making a landing in the face of the enemy.” He made this statement at a time when the Japanese nation was engaged in an insane war. This declaration was to call forth all Gakkai members to throw themselves into the midst of a Japanese society that was ignorant of the Daishonin’s Buddhism and boldly share its teachings with those around them, confidently proclaiming the truth of Buddhism and sharing their personal experiences in faith.  He urged that only through this tenacious and persevering process of spreading the correct teaching of Buddhism could Japan be saved from the brutalities of war.

Through his incarceration following the arrest during the wartime clampdown on the Soka Gakkai by the ruling militarist authorities, President Makiguchi had a profound awareness of kosen-rufu as the Gakkai’s mission. In the months leading up to his arrest (in July 1943), Mr Makiguchi began to repeatedly insist to his disciples that the organization must “cast off the transient and reveal the true”.

President Toda, who was also imprisoned with his mentor, had a deep awakening to its meaning.  While chanting in his cell and concentrating all his energy on seeking life’s ultimate truth, Mr Toda had a profound inner awakening that he had been among the Bodhisattvas of the Earth at the assembly of the Lotus Sutra.

After his release from prison (in July 1945) and based on his awareness of his mission as a Bodhisattva of the Earth, President Toda rose up to reconstruct Soka Gakkai.  President Toda vowed to triumph over the oppressive forces of authority responsible for his mentor’s death by boldly holding on to the banner of kosen-rufu alone.  This was the conviction of President Toda, heir to the spirit of his mentor who died in prison for his beliefs.

Subsequently, after overcoming various hardships, Mr Toda was inaugurated as Soka Gakkai’s second president. It was then that Soka Gakkai was reborn as great waves of awareness surged within the organization basing on that great conviction that everyone in the Gakkai are Bodhisattvas of the Earth.

This conviction is the central philosophy of the Soka Gakkai.  President Toda used to say, “This indeed is ‘casting off the transient and revealing the true,’ is it not?”. This is the deep awakening that President Toda had to the meaning of his mentor’s words while he was in prison.   The entire Soka Gakkai started to rise up to engage in the shared struggle of mentor and disciple, aware of their mission as Bodhisattvas of the Earth and vowing to realize kosen-rufu through their own efforts and bringing happiness to people.

In tandem to the profound desire of second Soka Gakkai President Josei Toda to bring happiness to all people, the publication of Collected Writings of Nichiren Daishonin was completed in 1952.  This profound act represents the significant return to the original sprit of the Daishonin’s writings.  It was made possible solely because of President Toda’s vow to leave behind an accurate and complete compilation of the Daishonin’s writings — letters and treatises composed amid adversity for the sake of leading people to enlightenment.

In his foreword to the finished work, President Toda wrote, “It is my undying wish and prayer that this precious scripture be disseminated to people throughout Asia and the entire world.” It is this single-minded determination that brought the publication of this sacred work that will last for all time to materialization. It was President Toda’s great vow to realize kosen-rufu that he succeeded in completing the Collected Writings, making the Daishonin’s teachings completely accessible to all people.  Subsequently for the last fifty years, it has been extensively read and studied by people across the world.

Following that, President Toda channeled all his focus and energy towards a goal which he dedicated the rest of his life to – to pursue the undertaking of propagating the Mystic Law and call forth fellow Bodhisattvas of the Earth in the number of 750,000 households to emerge.  This initiation of an unprecedented religious revolution is a battle to rid the world of misery and misfortune.  Henceforth, the appearance of the 750,000 Buddha forces would effectuate the establishment of a foundation committed to realize the Daishonin’s principle of “establishing the correct teaching for the peace of the land”.

President Toda’s monumental vow to accomplish a membership of 750,000 households energized and reinvigorated the Soka Gakkai.   A goal in which his beloved disciple President Ikeda led in the vanguard to achieve.   The February Campaign was the Soka Gakkai’s first major, full-fledged effort to actively expand the movement for kosen-rufu. It was also effectively the first campaign for kosen-rufu. President Ikeda led on the front lines of the organization at his mentor’s direct wish.  President Ikeda’s sole thought was to make Mr Toda’s pledge a reality.  He strived tirelessly, giving his all to actualize President Toda’s vision.

During the time when President Ikeda was twenty-two years old, he was prepared to give his all to support and assist President Toda as his disciple.  He vowed to triumph over all challenges facing President Toda and see to it that he becomes the second president of the Soka Gakkai.  Assuming immense responsibilities, President Ikeda fought tremendously to turn the situation around.  President Ikeda also shielded President Toda from every onslaught, acting as armor against barrages of arrows.

President Ikeda had engraved every word of President Toda’s guidance and teachings in his heart as if they were his last will and testament. One example of such is as follows. During their time, because it was impossible to do gongyo and chant freely in the bungalows and inns they stayed at during training sessions, President Toda said that in the future they would need their own facilities where the members could engage freely in training for faith and life.

Today we have such places, in our many culture, community, and training centers throughout Japan and around the world.  President Ikeda has taken his mentor words as his vow and had striven with all his life to have these facilities built, out of his personal vow to realize all of his mentor’s dreams and visions.

Similar to President Toda who had passionately pledged to make his mentor’s greatness known to the world, President Ikeda’s life has also been motivated by his vow to let the world know, especially through tributes at significant events and occasions, what a truly great man President Toda was.  Inheriting and carried on the will and vow of his mentor, President Ikeda led Soka Gakkai to achieve a membership of 7.5 million by 1970 and more than 12 million SGI members worldwide today.

The Lotus Sutra expounds that the great vow of kosen-rufu is the vow to widely spread the correct teaching to enable all living beings to attain Buddhahood. It professes that devoting one’s life to this great vow or aspiration is the true and eternal bodhisattva way.   The assembly of the Lotus Sutra on Eagle Peak is the place where the Bodhisattvas of the Earth vowed to widely propagate the Lotus Sutra in the Saha world in the Latter Day of the Law after the Buddha’s passing. These Bodhisattvas of the Earth go forth from the pure land of Eagle Peak into this strife-filled world to carry out their mission for kosen-rufu, and return to it again when they have fulfilled their mission for that particular lifetime.

In The Dragon Gate Gosho, we find the Daishonin’s famous words: “My wish is that all my disciples make a great vow” (WND-1, 1003). Nothing is more powerful than the great vow that the Daishonin’s disciples make to realize kosen-rufu, to share the Mystic Law with others, and to attain Buddhahood themselves and help others do the same. The benevolent forces of the universe protect those who strive to achieve this great vow. Because of the commitment to this vow, the Soka Gakkai has grown into the global movement today.

In President Ikeda’s Lecture on the Dragon Gate Gosho, he said, “The great vow of Buddhism can only be actualized through the persistent challenge of going out into society and earnestly seeking to do whatever we can to inspire and encourage each person we encounter, leaving no stone unturned, so to speak. That is why both Mr Makiguchi and Mr Toda placed such great importance on one-to-one dialogue and discussion meetings. The way to truly fulfill the great vow for kosen-rufu is to continue reaching out in dialogue to the person right in front of us and conveying through our spirit and lives the greatness of the Mystic Law, the key to genuine happiness.”  The mentor disciple relationship is no more than both the mentor and disciple having the same “shared vision” and “shared vow” for the future, for kosen-rufu.

President Ikeda concludes his lecture by stating that it is now the time when Bodhisattvas of the Earth awakened to Nichiren Buddhism appears all over the world and strives for kosen-rufu with solid unity of purpose. The Soka movement is an alliance of Bodhisattvas of the Earth who share the same great vow. Youthful disciples who will shoulder the second act of kosen-rufu have stood up in communities everywhere. He declared to have entrusted everything to them and the future of kosen-rufu is in their hands.
<ii. Enlightenment always begin with a Vow