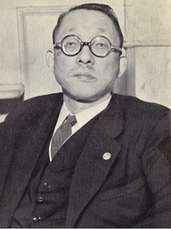 Josei Toda (戸田 城聖, Toda Josei, February 11, 1900 – April 2, 1958) was an educator, peace activist and second president of Soka Gakkai from 1951 to 1958. Like his mentor, Tsunesaburo Makiguchi, he was an innovative educator disillusioned with the Japanese educational system—which he thought of as suppressive of individual thought and as geared toward the interests of the state—Toda took immediate interest in Makiguchi's pedagogical theories when they met in 1920. Toda was the first to apply those theories when he began managing a private school in Tokyo.

Toda began practising Nichiren Buddhism in 1928 and two years later, together with Makiguchi, he founded the Soka Kyoiku Gakkai ('Value Creation Education Society'). With the onset of World War II, however, they met with harassment and prosecution. Both were arrested and jailed by the government in 1943 on charges of blasphemy against the deified emperor and violating the Maintenance of Public Order Act; the society, in effect, ceased to exist. Makiguchi died in prison in 1944. Toda was released just weeks before Japan's surrender in 1945. While imprisoned, Toda, through his study of Nichiren Buddhism, had come to the conclusion that Buddhahood, or enlightenment, is inherent in life itself, and that all people can manifest it.

That realization, coupled with his deep anger toward the government's exercise of power, became the motivation for his efforts to propagate Nichiren Buddhism for the remainder of his life. He renamed the pre-war society Soka Gakkai ('Value Creation Society'), thus expressing his conviction that its mission should not be confined to educators and the field of education but should extend to the whole of society. On May 3, 1951, he was inaugurated as second president of Soka Gakkai.