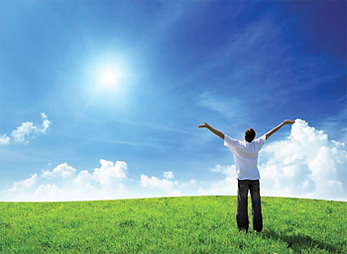 Thea Matthews finds joy after the stillbirth of her daughter Jovita.

Thea Matthews wrote this experience when she lived in Bowling Green, Ky. Recently, Thea and her family moved to Michigan.

In July 1997, my husband, Bruce, my daughter, Salina, and I moved from Columbus, Ohio, to Bowling Green, Ky. Bruce had just finished his engineering degree and had gotten a job there. After moving into a new house in October, I discovered that I was pregnant. With all the changes that had just occurred in our lives, we were a little shocked but excited at the same time. I really wanted a second child and was looking forward to a new addition to our family.

My first pregnancy was pretty difficult, and I had hoped that this one would not be so hard, but it was much more difficult. For the first month, I was sick with a viral infection that I could not get over. Finally, I overcame the infection, but 24 hours of nausea and fatigue set in. Then nine weeks into the pregnancy, I started bleeding. Not knowing whether I was threatened with a miscarriage, I was advised to seek bed rest. Nausea, fatigue and bed rest can make it really difficult to unpack and organize a house and care for a very energetic 4-year-old. The bleeding finally stopped after three weeks, and an ultrasound showed that the foetus was fine. Bruce and I were so relieved.

I still felt so miserable. At four months, I began to suffer from chronic insomnia on top of the nausea and fatigue. For the next two months, I would get two or three hours of sleep a night. I didn’t know sometimes how I would get through a day. At times, I found it too much to sit up and do gongyo and would lay on the couch and do it. But I chanted morning and evening because I knew that this is how I would get through the day, and because wanted to have a happy, healthy baby.

Despite my miserable physical condition, there were some very positive things going on in the pregnancy. I didn’t like my first doctor with Salina’s birth and was chanting to find someone I liked to help to deliver this baby. I found two wonderful midwives in Tennessee.

Not only were they experienced, they were so humanistic, and I looked forward to my appointments with them. Salina and I would go to the appointments and the midwives would get Salina involved in helping to take my blood pressure and listening to the baby’s heartbeat. The appointments were special to Salina and she felt a connection to this baby.

On Thursday, March 19, I felt very strange, and I noticed that I hadn’t felt the baby move all day. When I contacted my midwife that evening, she was very concerned and told me that a baby that doesn’t move at six months might not be alive. Well, I simply did not believe that because I was six months pregnant, and because I was chanting for a healthy baby. Even so, my husband and I rushed to her office, an hour’s drive away. I performed morning prayers before I left and chanted all the way there.

The midwife spent several minutes looking for a heartbeat but found none. As I lay there listening to that silence, I felt as if my life was being swallowed by some strange darkness.

After six months of hell, this could not be happening to me. Once a doctor confirmed my midwife’s diagnosis, Bruce, Salina and I returned home to decide whether I would wait for the onset of labour or be induced. At six months pregnancy, I would have to go through a full labour and delivery.

I didn’t sleep that night, and as the sun rose on Friday morning, for the first time in my 13 years of practicing Nichiren Daishonin’s Buddhism, I could not find any reason to do gongyo and chant. As I lay there crying, I wondered: “Why, why should I chant? What was the purpose?”

My husband did gongyo and chanted for a long time, then came downstairs and read to me the following passage from SGI President Ikeda: “Life is eternal. Suppose a person dies in pain and suffering. Even after death, that person’s life may remain in a state of suffering. It might be likened to someone moaning in his or her sleep due to a nightmare.

“If you chant daimoku with that deceased person in mind, you can remove the suffering from his or her agonized life and impart ease and joy through the rejuvenating and illuminating power of Nam-myoho-renge-kyo. And since chanting is that powerful, there is no way that your daimoku cannot help move in the direction of happiness the lives of you parents and friends who are still with you. Though it might be difficult to appreciate at first, the mud of our suffering provides the building material from which we can erect a solid bulwark for our palace of happiness within. The deeper the mire of suffering, the more indomitable a palace we can establish” (Discussions on Youth, vol. 2, pp. 201–02).

As he read this guidance, something stirred in my heart. Through all the pain I was feeling, I realized that I needed to chant for this child I had lost. I managed to get myself out of bed to do so.

Throughout the next several days, I experienced the power of my practice helping me through this difficult experience. People in my life surrounded me with love and support.

Friends I had recently made in Bowling Green helped care for Salina, brought food and offered comfort and information about how to get through this experience. Two of my sisters, one of whom I had not been getting along with, drove several hours to see me. My mother and father drove down and stayed with me through the whole ordeal. My mom does not chant, but she sat with me many times as I did. She spent many hours holding me in her arms as I wept uncontrollable tears. My father, who normally tells you exactly what he thinks, never said anything about any of our decisions concerning the birth and waited patiently through everything. I never realized how lucky I am to have the parents I have.

Even people I did not know reached out to me. Bruce and I realized we had to plan a funeral. We had no idea how to do it, and in my state of mind, I just didn’t know where to begin. A woman, Joy, from Nashville, had heard about our situation from our midwife.

She, too, had lost a child soon after she gave birth, so she understood the anguish I was going through. Without us asking, she had made several long-distance phone calls and found out where and how to have the baby cremated. She arranged everything for us. I felt so fortunate to have this woman come into my life.

The doctor and staff at the hospital where I delivered my baby were incredible. I went to a small 36-bed hospital in Carthage, Tenn., and I have never met nurses and doctors who were more humanistic and compassionate. They were human beings before they were medical professionals. The doctor held my hand when I cried. She encouraged me when she saw I was in pain and afraid. The labour was taking longer than expected and one of the nurses had her husband bring a video from home for my daughter to watch. Whatever I needed, they were there to help. I felt so fortunate to go through this experience at that hospital.

Shortly after midnight the baby was born. She was a girl, and she had died because she had developed severe deformities. We named her Jovita, which means joyous. With the help of my midwives and doctor, I summoned the courage to hold Jovita, and in the morning, my parents and Salina held her as well.

We returned to Bowling Green with the baby. Before taking her to be cremated, Bruce,

Salina, my mother and I did chanted for her. During that time, I realized how protected I was by my Buddhist practice. I realized in a very profound way that this was our karma and because of my practice, the universe had reached out to us and at every step of the way had helped us through this trauma. Through my pain, I could feel the awesome power of practicing this Buddhism.

I think the most important benefit came with the memorial service. There are no other members in Bowling Green, Ky., and since moving there, Bruce and I had been chanting about and trying to find ways to introduce this Buddhism to others. We had not been very successful. With SGI-USA members far away, the only people who could attend the service were our friends in Bowling Green. On the day of the memorial service, all my friends were there and they all got to hear Nam-myoho-renge-kyo and see the Gohonzon.

Jovita, in her short 6-month life was able to introduce Buddhism to more than 11 people.

If Jovita had lived to full term, which 50 percent of babies with this deformity do, the shock of expecting to deliver a healthy baby but delivering one with anencephaly, (a congenital absence of a brain or severely deformed one), would have been far more painful for us. Had I miscarried her, I never would have had the opportunity to share this Buddhism with others. If Jovita had to die, she died at the best time to do the most good.

In “The Three Kinds of Treasures,” Nichiren Daishonin says: “It is rare to be born a human being. ... Life as a human being is hard to sustain ... But it is better to live a single day with honour than to live to 120 and die in disgrace. ... More valuable than treasures in a storehouse are the treasures of the body, and the treasures of the heart are the most valuable of all” (The Writings of Nichiren Daishonin, p. 851).

Jovita only lived 27 weeks, but her life was so purposeful and powerful. Because of her, I could share this Buddhism with others, I could see the great power of this practice in our lives and I could see all the love I have in my life. While I still grieve for the loss of Jovita, I feel so fortunate to have had her in our lives.