Book Review - Recollecting President Ikeda's Third Visit to Singapore
A book review of 'Singapore, where the Crown of Humanity Shines - A Compilation of Poems and Essays on Singapore by Daisaku Ikeda' Part 3 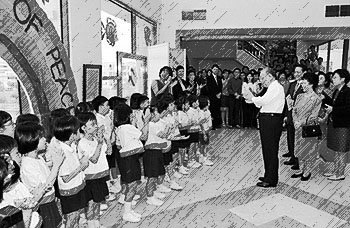 The third visit to Singapore was not only a significant one to Singapore but it was also significant to Sensei’s life as it was his last overseas trip.  He has not stepped foot overseas since then.  Compared to Taiwan and Indonesia where Sensei wanted so much to visit but did not manage to, Singapore received Sensei 3 times! Are we worthy of such an honour?

Spending a total of 6 days in Singapore from the 22nd to 27th November 2000, Sensei met with former Singapore President S. R. Nathan, paid his first visit to the SSA headquarters building and revisited Singapore Soka Kindergarten, where he unveiled a commemorative plaque.  Sensei also received an honorary doctorate from Australia’s University of Sydney while attending the school’s graduation ceremony for international students that was held in Singapore. It is indeed ironical that the award that Sensei received from Singapore is from a University of Australia which specially arranged the conferral in Singapore and not from a local university.

Reading Sensei’s guidance from the trip repeatedly, is there something Sensei wanted to tell all of us? Something particularly strikes my attention.  In all the three visits, Sensei repeatedly mentioned the spirit of the lion king - the importance of standing up with courage.

In the poem “Paths of Verdure in the Lion City” given to us in 1988, Sensei states “Stand up with Justice! Your power will increase twofold!” He further quotes the Gosho stating that “The Lion King fears no other beast.”

In the second visit, Sensei illustrated the story of Dr Martin Luther King’s struggle for equal rights for African Americans and how Mrs King’s determination and courageous actions saved Dr King and paved the way for the victory of the Birmingham campaign. He also related how Shijo Kingo overcome the numerous crisis he faced based on prudence, courage and firm faith.

In his third visit, Sensei again talk about courage and related the story of Lim Bo Seng. He also explicitly warned against complacency in an organisation once the foundation has been built thereby losing the vibrant, pioneering spirit and passion for challenging new horizons!

During this third visit, at the encouragement to representatives of Singapore in ICA, Sensei encourages everyone to live a way of life in which we strive to fulfil our mission based on faith in the Gohonzon. Buddhism exists to enable people to find true happiness.

“Over the centuries, the true spirit of Buddhism was perverted and its priests came to think that people existed for the sake of religion, instead of the other way round.” Sensei says we must continue to practise Buddhism towards the realisation of kosen-rufu, always striving together with SGI.

“The distinction between good and evil in Buddhism is strict. Only by thoroughly standing up against evil can we establish a life of genuine virtue and goodness and bring forth great benefit. Please engrave this in your hearts.”

In the SSA-SGI Australia Executive Conference, Sensei talks again about the significance of the lion symbolism that appears in Buddhism.

“No epic undertaking can be accomplished in a single generation. Only when the mentor’s spirit is inherited by the disciples, and passed on continuously to successive generation of disciples, can such undertaking be achieved. I, too, am confident that we have nothing to worry about and that the future of worldwide kosen-rufu will be secure as long as you, the members of SSA, are here walking the “lion’s path”.

What is the heart of a lion king? In a word, it is courage. Courage is not found outside us. It exists within. Nor is it something that only special people possess. Everyone has it. Yet, far too many people keep this inexhaustible treasure locked up inside them and spend their lives adrift upon a sea of cowardice, timidity and delusion. What a terrible waste! We must “summon up” courage, as the Daishonin urges and break through our cowardice.”

Sensei talked about Lim Bo Seng, the young Singapore hero who because of his resistance movement against Japan invasion, was imprisoned, tortured and died in prison.

“Mr Makiguchi, who gave his life for his beliefs, was fond of exclaiming, “Rather a single lion than a thousand sheep!” A lion is another name for a person who is brave enough to stand alone. It is within this courage to stand alone that we find the essence of faith and the key to victory in life. Writes the Daishonin: “My wish is that my disciples will be cubs of the lion king, never to be laughed at by the pack of foxes.” This is his dearest wish.”

Towards the end of the same guidance, Sensei wrote:

“The SSA has seen tremendous growth. There are now seven SSA community centres, with an eighth soon to be built in the northern part of Singapore (referring to Senja Soka Centre).

There is a saying that starting and undertaking is easy but maintaining it is difficult.  Human beings tend to lose the robust spirit to keep challenging themselves once a solid foundation has been established. Instead, they move into the defensive, growing conservative and self-protective. But it is precisely when the foundation has been laid that the real struggle, the real challenge, begins. No matter how ideal or comfortable the circumstances we may find ourselves in, we must never lose our vibrant, pioneering spirit and passion for challenging new horizons. We must stay on the offensive, always striving to take fresh initiative and to keep advancing.

Even when Mr Makiguchi was in his seventies, he would punctuate his encouragement to young people with the words, “We, youth…,” including himself as one of them. In terms of his inner state of life, Mr Makiguchi was a youth all his life long. Being youthful has nothing to do with age. It is a matter of attitude and how you live your life.

As long as this youthful spirit stays vibrantly alive inside you, your growth and development will know no bounds. I hope all of Singapore members will stay forever young and live out their lives with vigour and passion.”

It is my belief that those words are spoken with an insight of the situation in Singapore based on the Buddha's wisdom.

13 years have passed since the last visit.

·         Objectively, can we say that our membership has increased?

·         Have we won over the battle against the devilish function obstructing the expansion of Buddha forces?

·         Have our organisation and our leaders lost the robust spirit of challenging or lapse into complacency?

·         Are we still challenging with the pioneering spirit that we once had, actively doing shakubuku and passionately working for kosen-rufu in the frontline?

·         Did the top leaders of SSA take such explicit guidance given by Sensei in Year 2000 seriously?

Instead of renewing their vows for kosen-rufu, top leaders become defensive, growing conservative and self-protective. They persecuted those who spoke up with courage to point out their stagnancy and deviation from the founding spirit of the three presidents.

In his concluding words during the acceptance speech of the Honorary Degree of Doctor of Letters from the University of Sydney, Sensei wrote:

“One philosopher left these words of wisdom to young people: “Being unwilling to learn is a shame”. I have tried to follow these strict words as my motto since my own youth.”
President Ikeda's Second Visit