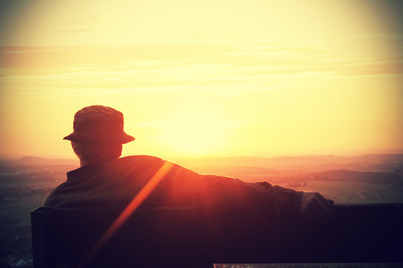 The battle with cancer is a major spiritual battle.  The initial blow during its announcement, the process of treatment, the pressure one felt during operations, the fear of relapse.

Osamu Hirota (age 77 years old) overcame not 1, but 2 types of cancer i.e. cancer of the tongue and the throat.  In the fight against cancer, Hirota established a state of unwavering life condition.

On February 1991, Hirota felt something was amiss with his tongue.

In the beginning, the doctor diagnosed it as stomatitis (oral inflammation) but Hirota felt suspicious and became mindful of the strange red swell.When he saw the inner insert of his own tongue in the mirror, there was an annular recessed black tumor.

He then went to Kyoto Medical Centre for treatment with a recommendation letter from his local hospital.

After the diagnosis, the doctor told him, “The chance of suffering from cancer of the tongue was very high.”  “We would like you know the actual results of the diagnosis and the forthcoming treatment after a week… ”

In the midst of listening to the doctor’s explanation, he could no longer hear the doctor’s voice.  Hearing the news that he had cancer left him in a state of shock, the mind completed blanked out and not knowing what to do next.  He could not even recalled how he had driven back home.  Even when he was sitting in front of the Gohonzon, his thoughts went repeatedly, “Am I going to die just like that… “.  He could not even assured himself to pray.

At that time, Hirota was at the ripe, strong age of 55.  He was working in an electronic manufacturing company, where he was required to travel to places like Niigata, Sado, the headquarter in Tokyo and other areas in Japan.

3 years ago, he was transferred to Kyoto to become the general manager in charge of the western regions of Japan.  Just when he was convinced that he had achieved actual proofs in the area of work and faith, the karma of sickness had attacked him.

His wife, Chika (age 76 years old) accompanied him to have a dialogue with a senior-in-faith.

“It can definitely be conquered!  Live for the sake of kosen-rufu, chant with daimoku infused with such a vow!”

A burning sense of conviction shook the heart of Hirota.

After returning home, he faced the Gohonzon and was determined to chant ceaselessly until he could feel the confidence.  Unknowingly, after a few hours of chanting, the fear of battling against cancer transformed into a determination of battling it in Hirota’s heart.

He realized that, “This was the training to grasp the meaning of true faith.”

Hirota wrote slowly, “I will definitely recover from the cancer of the tongue.”, “To fight together with SGI President Ikeda in the 21st century.”, “To advance together with kosen-rufu till a hundred years old.”

The result of the cytodiagnosis once again showed that it was cancer without a doubt.

Hiding the news of cancer away from his colleagues, he went back to his company to hand over every of his tasks to them.  Immediately once he returned home, he chanted desperately, not wasting a single moment in his fight against cancer.  It was like a fight against the “demon of death”.

He could lose his ability to speak due to his operation.  Hence when he could still utter now, he gave his all to do whatever that he could, conducted dialogue and gave personal guidance without respite.

On the next day after he completed chanting 100 hours, he entered the hospital in a refreshing and energetic spirit.

On 7 March, 8am, just before Hirota stepped into the operating theatre, he received a message and a fukusa (Japanese-style handkerchief) inscribed with the word, “Health” from SGI President Ikeda.  He made his determination, “I must be victorious.  This is the vow of a disciple.  This is paying the debt of gratitude to my mentor!”

The operation took 12 hours.  This was an operation where the throat was cutopened, the lymph node was completely removed, the tumor at the root of the tongue was removed as well and a 15 cm intestinal cell was transplanted.

When Hirota woke up in the intensive care unit, he knew that the operation went on smoothly and was successful, and he thanked the doctors and nurses.

Hirota took his food via a nose tube.  Because he was unable to speak, he could only rely to sketching and writing notes to communicate, something which he felt very impatient of.  During this period, his wife Chika was taking care and supporting him in every moment.

Hirota’s recovery was ideal and on 5 May, he was discharged.  Once he returned home, he sat in front of the Gohonzon.  At that time, he was unable to speak, hence was unable to chant.  However, as he reminisced, tears flowed ceaselessly.

Fortunately, he recovered his voice not long later.  He then returned to his position at work, and returned back to the frontline of kosen-rufu.

7 years had passed without any relapse.  In April 1998, he received another news of cancer.  This time it was the cancer of the throat, which was not a result of repercussion of the previous cancer, but a brand new one.

Hirota thought to himself, “Why twice?”  However, he dispelled this thought very quickly.  He remembered reading this line in the Gosho (major writings of Nichiren Daishonin) during his previous battle against cancer, “The seeking mind arises from sickness.”

“The cancer taught me the greatness of daimoku (Nam-myoho-renge-kyo).  This bout of cancer was for the sake of polishing my own faith even further!”  When he was feeling so determined at the point in time, fear and unrest disappeared and conviction arose.  At that time, even Hirota felt it was unbelievable to feel this way, as both cancer of the tongue and throat could result in losing his voice forever.

“The demon of sickness wanted to rob me of my voice!”  For the sake of kosen-rufu, Hirota was determined not to give in and be defeated.  When he finally understood the significance of this 2nd round of cancer, Hirota was finally able to make up his mind and form up his determination.

He was admitted into hospital in early May.  His son, Nobuya (age 46 years old) visited him in the hospital and said, “SGI President Ikeda is currently giving guidance in Kansai.”  Hirota felt that “It was liked SGI President Ikeda had come to encourage him personally.”  He felt his courage soared by many folds, and pledged that he must be able to give a report of victory.

On 12 May, the same surgeon operated on him.  The surgeon used laser on the right side of his vocal cord, and realized that the cancer was more invasive than what was originally thought.  In order to completely eradicate cancer, he needed to operate onto the head of the throat.Even if the operation was successful, it was required for him to recover his vocal cord before he could know he would be able to speak.

8 days after the operation, although it was soft, he could finally speak!  At that time, Hirota said, “I am victorious!”  One month later, Hirota was discharged from hospital.

Hirota continued to work till he retired at 66 years old.  After he retired, he became the in-charge of the Residents’ Committee.  This year was his 50th anniversary of his faith.  He had recovered completely from cancer and there was no relapse.

Having watched them growing up, Hirota’s elder daughter and grandchildren followed him in the path of Soka.  One of SGI President Ikeda’s guidances became his prime point, “For what purpose do we live?  For what purpose do we enjoy longevity? It is all because of our mission of kosen-rufu.  Therefore, we must put the “faith to live healthy and long” into practice throughout our entire life!  We must also send a clear signal to the youthful successors the “faith to achieve absolute victory”.”