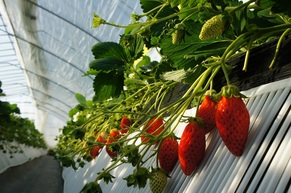 The Roots of Recovery
By Hideyoshi Mori
Japan

I am a third-generation farmer. When the Great East Japan Earthquake of 2011 struck, my life, like so many others, was changed in an instant. In my village alone, so many people perished. The young man I was training to be my successor on my strawberry farm also fell victim to the tsunami. I often asked myself why I survived, while others died. Alone in my salvaged pickup truck, I'd cry every day.

It was around then that I read a message of encouragement from SGI President Daisaku Ikeda, in which he stressed that life is eternal and that our lives are connected through prayer, which transcends life and death. His words resonated deeply within my life.

A week after the earthquake, I went back to my strawberry farm. There was nothing but sand covering the land. The farm was gone, and our house had also been wiped out.

The town of Watari had depended on strawberry farming for its economic survival, with average annual sales of about $31 million. The complete destruction of the strawberry farms meant total ruin, not just for the producers, but for the entire town.

The evacuation center became a place filled with the grief of farmers who had lost all hope. The feeling of despair was so strong it overwhelmed everyone's minds.

Farmers eventually began taking temporary jobs. But they struggled tremendously, as all they'd known was strawberry farming. Everyone was discouraged.

As a leader of the local strawberry farming group, all I could do was listen to my fellow farmers speak about their struggles. "I'm sick of being ridiculed at work for not knowing how to do my job." "If only I could go back to growing strawberries again." Everyone felt the same. What could I do to reinvigorate my friends? My heart was filled with this thought. I employed my Buddhist practice, chanting in earnest, "as though to produce fire from damp wood, or to obtain water from parched ground."

One day, I stood on the sand-covered land where my strawberry farm once flourished, a gentle sea breeze dancing around me. That natural breeze was what made the strawberries grow so well, protecting them from the intense summer heat. At that moment, I was struck by the thought: "Perhaps the soil is now rich with minerals from the sea that were carried inland by the tsunami."

I immediately planted three strawberry plants. Two months later, I pulled the plants out to find that they had already grown healthy white roots in the soil! I was astonished by the idea that we might be able to grow strawberries here again! I deepened my conviction in my Buddhist practice, which encourages us to make the impossible possible. I began convincing my fellow farmers to stand up again. I asked in detail what conditions would inspire them to farm again, and made a proposal to the government and Japan Agricultural Cooperatives.

In the spring of 2012, I received a call from the town hall. Our voices had convinced the local government to draw up a blueprint for recovery. The plan involved using government recovery subsidy funding to construct a large-scale strawberry farming complex with a greenhouse covering nearly 180 acres and boasting the most advanced technology, as well as to build a housing complex for farmers. A total of 104 farming households would participate.

Unexpectedly, I was nominated for the position of president of the owners' association. I declined, but the young farmers urged me to accept. President Ikeda is always encouraging us to listen to the youth, so with this in mind, I decided to take on the challenge.

I have learned from Buddhism that suffering can become a catalyst for positive change. For those of us who have lost everything, failure in this new project is not an option. I'm determined to work hard so all involved are able to say they are glad to have joined the strawberry housing complex, and that together we will become the number one strawberry producers in all of Japan!